Benson back in China amid Corona Virus outbreak

Article appeared in the Feb. 6 issue of the Express Weekly News…By Teresa Carey 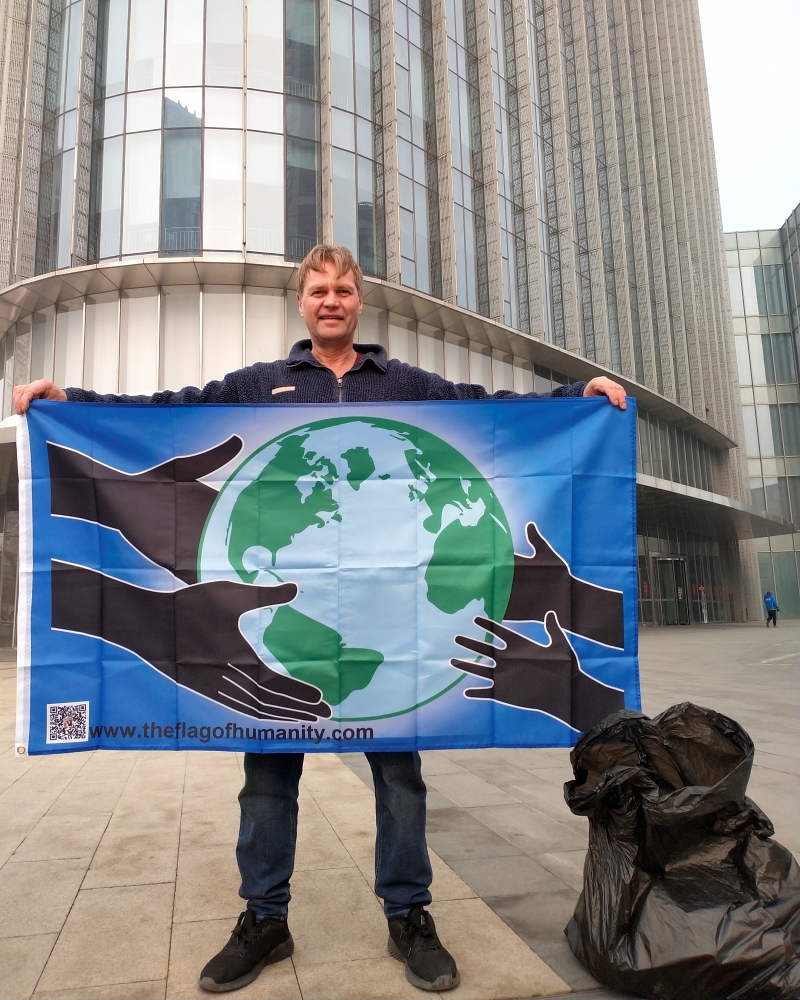 Gimli Fisherman, author, and the man behind the Flag of Humanity, Bruce Benson, has been in China since Jan. 3, teaching English, picking up trash and promoting his flag—which represents the passing on of the earth to the next generations in a spirit of global peace.

This is Benson’s second trip to China. He journeyed there last year to introduce his flag to the Chinese people, and tirelessly picked up garbage to prove his authenticity and sincerity to them while there. He has been carrying on with his daily trash pick-up while Thomas English School, where he is employed, is closed for break—despite the fact that streets all around him are deserted.

“Most of my Chinese friends are just staying inside, streets are ominously devoid of people, by normal Chinese standards. (The) government has said schools do not reopen until they say so,” Benson relayed through a series of private Facebook messages and by e-mail.

“Things are getting a little scary over here in China,” he said. “I feel like I’m in a movie, a post-apocalyptic one, not a fun one like The Hangover.”

Benson is staying in Jinan, Shandong province, located about 850 Km from Wuhan, the epicenter of the corona virus outbreak which some experts are now calling a potential pandemic. The virus has come to Jinan, but that city has not been shut down as other Chinese cities have been.

“The headmaster of my school sent me a video of the hazmat men and women taking someone out of a building very close to where I am now,” Benson said. “Sections of Jinan have now been shut off, and some apartment complexes have posted guards to keep strangers away, including my own. Everybody that can, has a mask on. Before this it was one in five by my estimation. Now it’s nearly 100 per cent. Everybody that can is staying inside.”

In Wuhan, the situation is far more dramatic, Benson said.

“A friend showed me a video of a hospital in Wuhan, corridors full of people, all wearing masks, three dead bodies on the floor that apparently stayed there for 12 hours before being removed. There was a lot of screaming and yelling and crying on the video. I hope my friends in Wuhan are alright. Me, I’m wondering what the…am I doing here,” he said.

Benson believes he can leave if he wants to. However, his passion for the Flag of Humanity is what keeps him in China for now, until the spring when he plans to return home for fishing season.

“There is at least one positive that can come out of this,” he said. “Considering how fast the virus has spread across our little blue dot, it has become apparent that we are all in this together. We must be our brother’s keeper if we are to survive. What happens in one corner can affect us all. But that lesson has been taught by every virus that has gone international.”

“Perhaps it’s times like this when an understanding of the commonality of being human is most important,” Benson said.